These Rhino3d for Windows Free Video Tutorials have been curated by the team at Simply Rhino to help you learn Rhino.

We hope they help to expand your knowledge of, and ways of working with, Rhino/Rhinoceros and some of its plugins.

Your presenter for this series is Simply Rhino's Senior Trainer, Phil Cook. Phil is an expert in Rhino3d and V-Ray for Rhino.

This first tutorial examines working with multiple instances of objects in the same Rhino file and introduces strategies to help with minimising file size and reducing memory overhead whilst at the same time increasing modelling and visualisation flexibility. The use of Rhino Block Instances and V-Ray Proxy Objects is described in detail along with a methodology to combine Blocks and Proxies together to overcome issues that arise when using them individually.

Video Tutorial 2 - Creating and Controlling a Transitional Surface in Rhino3d

In this second tutorial Phil looks at creating and controlling a typical transitional surface. Using the simple example of a vehicle wheel arch, Phil introduces how continuity is expressed and evaluated in Rhino before looking at a number of solutions to producing a controlled smooth transitional surface.

In this video, Phil outlines the process of creating simple textures in V-Ray for Rhino before concentrating on mapping these textures in Rhino. The standard mapping types are explained and demonstrated along with UV Unwrapping and Editing and Custom Mapping. Next Phil explains how to create decals in V-Ray for Rhino – a process which involves multiple diffuse layers and mapping channels.

Phil has created a series of videos examining the creation of a styling model for an engine cover that will ultimately be exported into SolidWorks.

In this first video in the series of three, we take a quick look at setting out the main construction curves and basic slab surfaces before moving on to look at a less than straightforward corner blend in detail. The corner blend or ball corner is often an area that causes problems for designers and modellers and we look at using some simple tried and tested strategies to overcome this.

In this video, the second in the series of three, Phil examines adding local detail to the engine cover model created previously. In modelling the air duct detail there are two main considerations. First, it’s important to create a seamless transition between the main surface and the lead in to the duct and second it’s important to control the edge blends so that they transition between a relatively straightforward corner blend to run out completely into the main engine cover surface. These are both common situations in 3D surface modelling even though the specific context might be different. With the duct detail completed, Phil looks at creating the centre blend to join the two symmetrical engine cover halves before checking that the geometry is optimised for exporting.

This third and final video in this special trilogy examines interoperability between Rhino and SOLIDWORKS. By making careful use of file referencing it’s possible to have styling data that can be updated in Rhino that drives parametric features inside SOLIDWORKS, thus saving time consuming re-modelling in both programs. If you use Rhino and SOLIDWORKS or you are a Rhino user and have co-workers or customers who use SOLIDWORKS then this video is for you.

This video series looks at creating production quality surfaces and solids from 2D design intent and focuses on a ceramic coffee pot. In many design disciplines, including the ceramics industry, it’s often the case that much 2D design work is done before being progressed to 3D and this tutorial follows that methodology. The starting point is an existing 2D CAD drawing presented in Adobe Illustrator. In this first video in the series of three we specifically look at the following:

If you'd like to follow the tutorial with the Illustrator file used in the video then you can download the .ai file by clicking on the image below: 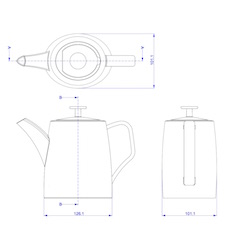 The second video in our series in which we show how you can create production quality surfaces and solids in Rhino from 2D design intent. In this video Phil looks specifically at Creating the Spout ‘A’ Surface, Creating the Lid ‘A’ Surface and how to Create the ‘B’ surfaces manually to allow for varying wall thickness of our coffee pot. If you want to follow the series with the same Illustrator file then you can download it from the link supplied above with the first video in the series.

The final video in our series in which we show how you can create production quality surfaces and solids in Rhino from 2D design intent. In this video Phil shows how to make the model watertight and then progresses to a quick render using V-Ray Express. If you want to follow the series with the same Illustrator file then you can download it from the link supplied with the first video in the series.

We'll be adding new tutorials over the coming months, keep checking this page to see the latest and if you've enjoyed these tutorials and there's something specific you'd like us to cover in the future then contact us & let us know.

More in this category: « V-Ray 3.0 for Rhino - Free Upgrades Creating an Editable Surface in Rhino3d »
back to top
Request Call Back